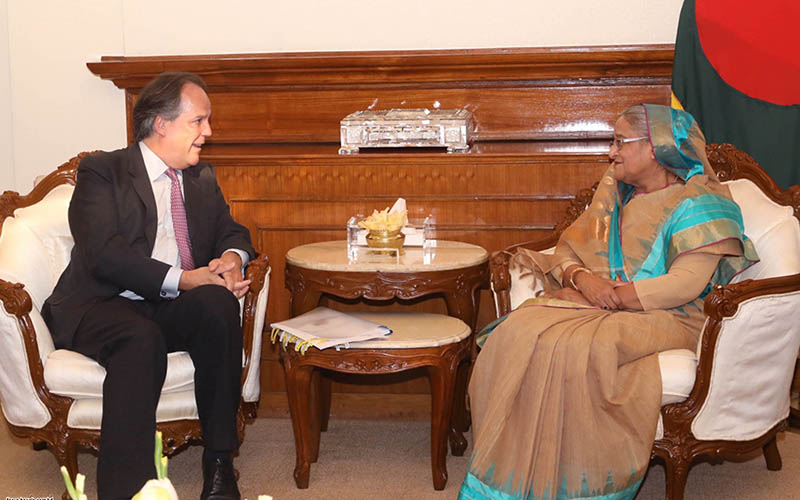 She made the appeal while visiting UK Minister of State for Asia and the Pacific at the Foreign and Commonwealth Office Mark Field, MP, paid a courtesy call to her at the Prime Minister’s Office (PMO) this morning.

Expressing apprehension about the scope of dispelling the frustration among the Rohingyas, particularly the young people, for having no job and uncertainty over their repatriation, she said, This is a huge problem in the

area as the Rohingyas have outnumbered the locals.

A vested quarter may use the frustration among the Rohingyas for bad purpose, she mentioned.

The situation of the Rohingyas will worsen during the monsoon, she said, adding that the government is developing an Island for their temporary accommodation.

The visiting UK minister described the Rohingyas sheltered over one million in Bangladesh as a ‘big burden’ for the country and wanted to know about their current situation.

Sheikh Hasina mentioned that she had struggled throughout her life for restoration of democracy while the UK minister congratulated the premier on her huge win in the 2018 national election.

The prime minister sought more British investment in Bangladesh for mutual benefits of the two countries.

The premier called upon the UK entrepreneurs to invest further in Bangladesh.

Appreciating the UK’s assistance in Bangladesh’s move to cope with the climate change issues, the premier said they have introduced trust fund to this end and some projects have been taken in the coastal belts keeping in

mind the issues of climate change.

Sheikh Hasina mentioned that Bangladesh media has been enjoying the highest level of freedom.

Bangladesh has historically close relations with the United Kingdom, she said and mentioned its continued assistance to uplift of different sectors in the country.

At the meeting, the UK minister gave assurances of continuing support for further development of Bangladesh.

The premier and they envoy expressed desire of further strengthening the relationships between the two countries in the areas of mutual interest.