THE ROHINGYA GENOCIDE DAY WILL NOT AND CANNOT BE FORGOTTEN 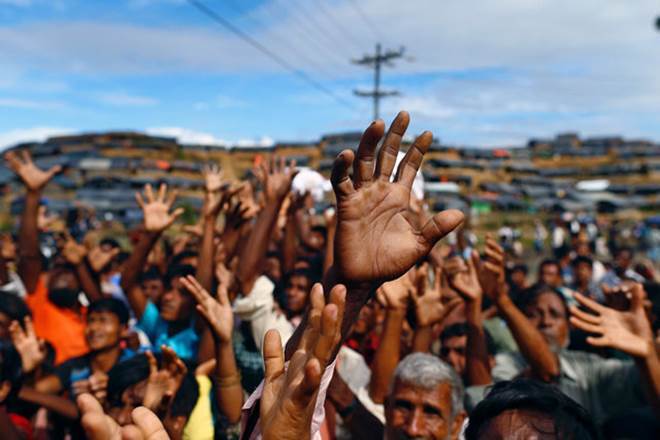 The “Rohingya Genocide Day” of August 25 is a memorable day for our people and generations.

For decades, the Myanmar brute forces and state-sponsored non-state actors have carefully pre-planned genocidal onslaughts against our innocent people. Families were massacred, mass graves uncovered, hundreds of villages scorched, thousands of houses burned to the ground, women gangraped, babies thrown into the flame, forcing about one million survivors to take refuge in neighbouring Bangladesh, creating a great humanitarian disaster and a threat to regional peace and security. We are grateful to the government and people of Bangladesh, and other receiving countries, for sheltering and taking care of our refugees, in solidarity and on humanitarian ground.

The destruction of Rohingya people in Myanmar began decades ago. Today they are mere ruins. Our homeland is irrecoverably destroyed, but the criminals could not destroy our faith. We have physical, psychological and spiritual attachments to our homeland. With strong will and determination we will fight to save it in self-defence. We will not be giving up.

Unfortunately, international community has failed us again and again. Almost all governments have avoided their treaty obligation to “prevent and punish” genocide according to the Convention on the Prevention and Punishment of the Crime of Genocide (CPPCG) 1948, or the Genocide Convention. Daw Aung San Suu Kyi also failed during her time as a leader and publicly defended the brutalities of the Myanmar army, even at the International Court of Justice. Thus, the Myanmar junta realized their criminal policy with impunity and to continue violating international law without consequences.

The attitude of the Myanmar military towards Rohingya people has not changed. The policies and stance of the oppositions, including National Unity Government (NUG) and Arakan Army (AA) are ambiguous. The situation is not conducive for voluntary, honourable, safe and sustainable return of the Rohingya refugees from Bangladesh and elsewhere to Arakan. It is crucial to ensure the protection of the remaining Rohingya living in confined villages, ghettos and apartheidlike concentration camps in Arakan under the threat of genocide and facing great humanitarian emergency.

We have continued to seek justice and accountability. We want victims to see justice served and the cycle of violence is not repeated. We seek an increase in criminal cases against all perpetrators, whether it is through local or national courts and at the International Criminal Court. All perpetrators must be brought to justice. No genocide can be prevented without intervention. Further, the Rohingya seek genuine inclusion in the creation of a federal democratic republic in Myanmar, where all ethnic minorities can co-exist in peace without the threat of genocide and other international crimes.

We welcome the U.S. government’s formal recognition of “Myanmar’s genocide of Rohingya. The utmost priority for the Rohingya now is to return home. Meanwhile, restoration and recognition of Rohingya’s full citizenship and ethnic identity, guarantee of their collective rights particularly the “Right of self- determination” along the lines of other ethnicities within the federal Union of Myanmar are imperative.

In conclusion, today we remember and honour all victims and martyrs. We will remember them forever. Today we also salute our female survivors, including the rape victims, for their courageous efforts to survive, even as refugee widows and orphans.

The extent of barbarity employed in Arakan against our people surpassed everything else that took place in Burma/Myanmar. That will not and cannot be forgotten.